Recent work on intra organization dynamics has started to approach organizations as complex systems in which different networks may be discerned (Borgatti and Halgin 2011; Aalbers et al. 2013). The basic idea is derived from the observation that people have a tendency to combine different possible aspects of a relation into a single tie with a concrete other (McPherson et al. 2001). When studying networks in an intra-organizational setting it therefore

is important to realize that a person operating in one network can simultaneously be nested in other networks of a different nature. This point of view is referred to as Granovetter’s (1985, 1992) concept of social ‘embeddedness’. Embeddedness is a multidimensional construct relating to the importance of social networks for action. The recognition that different networks might exist concurrently within an organization and hence different layers of interaction at the individual level simultaneously might be in place, allows for detailed information at the individual

level of interaction (Lincoln and Miller 1979; Robins and Pattison 2006). Conceptually this logic looks as follows: 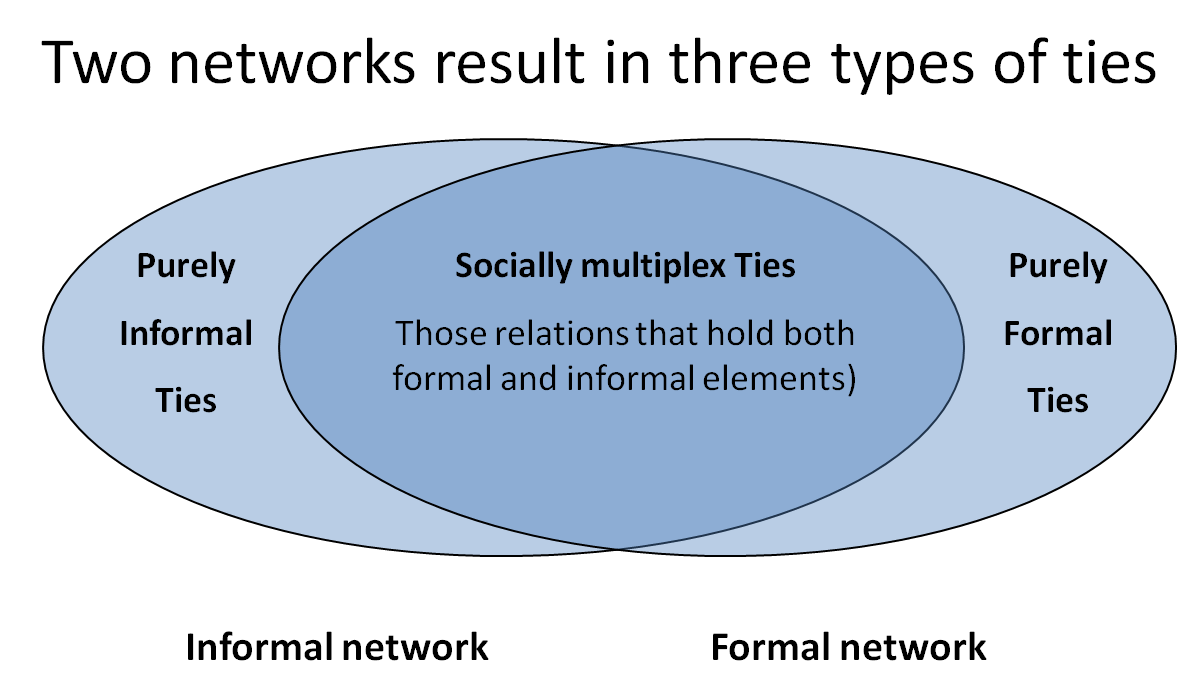 The relevance to those advising or partaking in organizations that aspire innovation is this: When these different possible dimensions of interaction combine into a single tie between two people this is known in the literature as ‘multiplexity’ (Ibarra 1993, 1995; Coleman 1988; Smith-Doerr and Powell 2005). Multiplexity has been shown in different contexts to produce beneficial results to the individual and to his social environment (Ibarra 1995; Burt 1984; Coleman 1988; Smith-Doerr et al. 2004; Minor 1983; Rogers and Kincaid 1981; Roberts and O’Reilly 1979). Studies in different settings have found that ties that combine multiple dimensions of a relation between two concrete individuals can have a substantial and qualitatively different effect in comparison to the effects of their constituting elements (Burt 1984; Smith-Doerr et al. 2004). Multiplexity has also been linked to innovative performance (Albrecht and Ropp 1984 ; Albrecht and Hall 1991; Cross et al. 2001). When individuals are connected in a number of different ways, more or even better information tends to be exchanged (Sias and Cahill 1998). This benefit is related to one’s improved position in this network. Because of the extra knowledge a person can determine and interpret better how someone will behave in one context if her behavior and attitude is known from a different context. In other words: a relation of one kind keeps in check the negative side-effects of a relation of a different kind (Marsden 1981; Albrecht and Ropp 1984). Driven by recent reviews of network theory (Borgatti and Halgin 2011) I  therefore identify multiplexity as another prime building block that requires further research in the pursuit to increase the understanding of intra-organizational innovation  networks. More on this in a prior study together with colleagues at the University of Groningen and Rotterdam School of Management via this link.